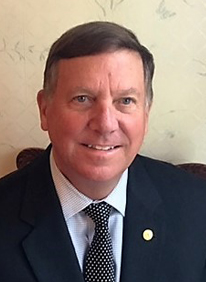 He is currently President & CEO – Independent Corporation in Louisville, Kentucky. He developed one of the nation’s most respected business communications film and video production company (Louisville Productions) from a firm that specialized in retail commercials. The company grew from less than $1,000,000 in sales to over $3,500,000 with repeat blue-chip clients like International Business Machines, Eli Lilly Company, Coca-Cola, General Electric, Brown-Forman, Phillips Petroleum, Lexmark International, Texas Instruments, Fannie Mae, Cummins Engine Co., United Parcel Service, Rolls Royce, Federal Express, DuPont and American Express. He has a life-long career in sales and marketing in the public affairs field where he took a start-up company (CVP Inc.) with no established reputation or credentials and built it into a $1.5 million gross billing corporation during its first year of operation or designing the program concept, prospecting underwriters and selling the underwriting business deals.

He holds a bachelor’s degree in history from Bellarmine University. In 1997, he made history becoming the first career Public Affairs Officer in Air National Guard nationally, to be promoted to general officer. He would go on to serve as Director, Air National Guard Senior Leadership Development Course held semi-annually in Washington, DC. A course designed to bring recognized, seasoned Air Guard leaders from the field together with newly selected Wing command level leaders to share their collective wisdom and experiences. He culminated his military career achieving serving as the 51st Adjutant General of the Commonwealth of Kentucky from 2007 to 2015. During that period, he would be also be elected President Adjutant Generals’ Association of the United States. He is the recipient of numerous awards and decoration including the United States Air Force Distinguished Service Award with 1 Oak Leaf Cluster.

He has over decades history of community activism before joining the board of directors in 2017. Along with his duties as a board member he currently serves as Air Force Association – Kentucky State President and Congresswoman Northup’s Service Academy Selection Board.