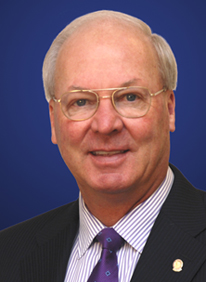 General Craig R. McKinley, USAF (Ret) was chairman from 2014-2017. He previously served as the Chief of the National Guard Bureau and member of the Joint Chiefs of Staff, Military Adviser to the President, the Secretary of Defense, the National Security Council and was the Department of Defense’s official channel of communication to the Governors and to State Adjutants General on all matters pertaining to the National Guard.